The Los Angeles Rams entered 2020 with Sean McVay openly planning to use a hot-hand approach with the team's backfield.

Throughout the first two-thirds of the season, he kept his word, although rookie Cam Akers missed time early in the season.

Down the stretch, the Rams abandoned the committee approach and turned to Akers as the team's workhorse back.

As noted in our Cam Akers 2021 Fantasy Football Profile, Akers handled the fifth-most running back touches (94) from Weeks 13 to 17 and another 49 touches in two playoff appearances.

Not only did McVay turn to Akers late last season, he has recently referred to the (now) second-year back as an "every-down back."

From Weeks 2 to 7, Henderson performed as an RB2 (top-24 fantasy back) in four of six weeks. In one of those two weeks that he finished outside the top 24 fantasy running backs, Henderson was the RB26 (Week 7).

Malcolm Brown is a free agent heading and the franchise is "unlikely to bring [him] back," per The Athletic's Jordan Rodrigue.

While Akers will enter 2021 as the clear lead back, a 1-2 punch means that Henderson could see in the neighborhood of 8-10 touches per game to spell Akers as a change of pace. If Akers were to miss any time, Henderson would emerge as a weekly top-20 option for as many games as Akers misses.

Not only will Akers and Henderson get to run behind one of the league's better offensive lines, but the upgrade at quarterback from Jared Goff to Matthew Stafford should help lead to more offensive output overall for the Rams offense in 2021.

Given the low draft-day cost, Henderson has a chance to outperform his 12th-round ADP (half-PPR) even if Akers stays healthy for a full season.

Based on scoring format, here are the current Fantasy Football ADPs for Darrell Henderson:

Below is a chart of Darrell Henderson' half-PPR ADP over the past month: 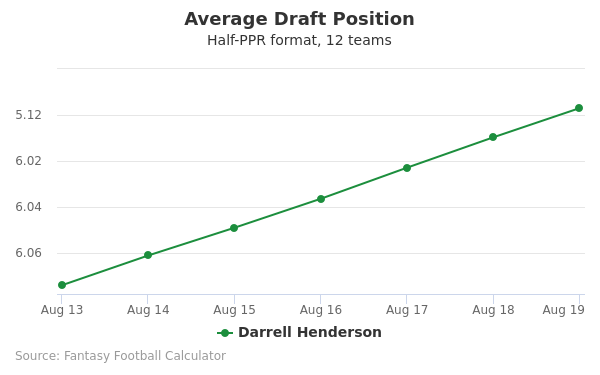 At a minimum, Henderson is a high-end handcuff for Akers. Similar to other players like Latavius Murray, Henderson may return flex value in deeper leagues as a stand-alone option, but he has a clear pathway to RB1/2 status when the team's starter is out. Compared to other options being drafted in his range, Henderson offers as much upside as his double-digit round contemporaries (Alexander Mattison, Gus Edwards, Anthony McFarland Jr., etc.) for fantasy managers in 2021.