Throughout the year and leading up to the 2022 NFL Draft, we will update our Buffalo Bills Mock Draft Roundup showing picks for the Buffalo Bills from several prominent sites and draft analysts.

For a more inclusive lists of mock drafts for the Buffalo Bills, check out our Buffalo Bills Mock Draft Database.

The following are picks in recent mock drafts for the Bills:

Buffalo used their first two picks -- Gregory Rousseau and Carlos Basham -- to improve their pass rush. While the Bills have one of the league's best corners in Tre'Davious White, they could use an upgrade opposite him. Jobe (6-1, 192) is a long and physical corner that had 11 passes defended, 55 tackles, two sacks and two forced fumbles in 2020.

Running back was a common selection in mock drafts for the Buffalo Bills this past draft cycle, with players like Najee Harris and Travis Etienne serving as the main options. But with both players off the board when the Bills were on the clock last week, the organization went in a different direction and added pass rusher Gregory Rousseau.

Still, the team is looking to be more efficient on the ground, and that could mean they address RB early next draft cycle. Iowa State RB Breece Hall could be an option for the Bills, and he is coming off a huge season. Last year Hall led the nation in rushing yards and 100-yard games, and was named the Big-12 Offensive Player of the Year. He also finished sixth in Heisman Trophy voting. Another huge campaign and Hall will be in the mix for RB1.

Battle made a few spot starts as a true freshman back in 2019 before taking over full-time in 2020. He is a solid all-around safety with ideal size at 6-foot-1, 210 pounds. Battle earned a run-defense grade of 79.1 and a coverage grade of 81.5 last year.

Here is where the Buffalo Bills rank in terms of average, best and worst:

Below you will find a post-draft roundup for the Bills in our consensus 2021 NFL Power Rankings.

Player who benefited most from draft: CB Levi Wallace

Draft experts, football pundits and fans all expected the Bills to take a cornerback within the first two days of last month's draft; instead, general manager Brandon Beane waited until the sixth round to select Wisconsin corner Rachad Wildgoose, who probably won't be usurping Wallace as the Bills' starting cornerback in his rookie season. While Wallace will still need to stave off impressive 2020 seventh-round pick Dane Jackson, the fact Beane didn't spend an early pick on a cornerback signals his confidence in Wallace, a three-year starter. -- Marcel Louis-Jacques

If the Bills had a discernible weakness they needed to address entering the offseason it was their pass rush. No Buffalo defender had more than five sacks during the team's 13-3 campaign, so the Bills used the draft to add some firepower. The team gobbled up Miami edge Gregory Rousseau in the first round (No. 30 overall), then doubled down by selecting Carlos Basham Jr. one round later (No. 61). Both prospects will get the opportunity to contribute as rookies, and the Bills need at least one of them to hit in an offseason where the AFC-best Chiefs have fortified their offensive line.

Below you will find the NFL weekly regular-season schedule for the Buffalo Bills:

The table below are all of the 2021 NFL Draft picks selected by the Buffalo Bills.

The chart below displays the Fantasy Football Average Draft Position (ADP) movement over the past 30 days for Buffalo Bills quarterback Josh Allen in 12-team standard-scoring formats. 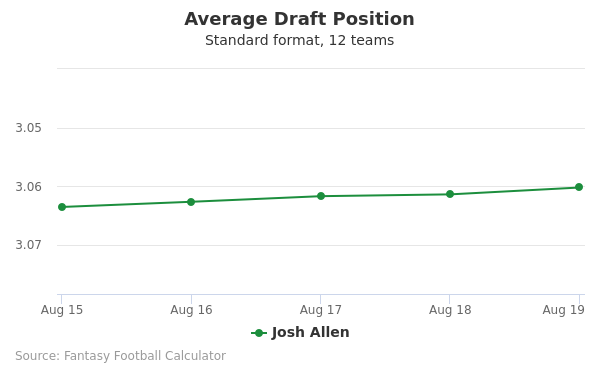