Throughout the year and leading up to the 2022 NFL Draft, we will update our Denver Broncos Mock Draft Roundup showing picks for the Denver Broncos from several prominent sites and draft analysts.

The following are picks in recent mock drafts for the Broncos:

If the Broncos are picking this late, it's possible that Drew Lock took a major step forward in his development. There were draft-night rumors -- e.g., Mark Schlereth called it "close to a done deal" -- that the Broncos would acquire Aaron Rodgers, but those didn't materialize during the draft.

While I was still tempted to slot another Bearcat (quarterback Desmond Ridder) here, Denver's top pass-rushers -- Von Miller (2022) and Bradley Chubb (2023) -- will become free agents in the next two offseasons. Before Sanders decided to return to school, he was getting some late-first buzz. Sanders had 10.5 TFLs and seven sacks over 10 games last season.

The Denver Broncos passed on a quarterback early in the 2021 NFL draft, and while rumors continue to swirl around veteran passer Aaron Rodgers, the QB position could be in play for the organization in the next draft cycle.

Another passer to watch as a potential QB riser is Arizona State's Jayden Daniels. Daniels was an immediate starter for the Sun Devils as a true freshman, and was an Honorable Mention for the Pac-12 Freshman Offensive Player of the Year in 2019. In just four games last year, Daniels completed 49 of 84 passes for 701 yards, five touchdowns and a single interception. He added another 223 yards and four touchdowns on the ground. With a big junior season -- which is certainly possible -- Daniels could be the next QB to rocket up boards during draft season.

Lucas is a powerful right tackle who rarely gets moved on tape. He likely would have declared this past year had the Pac-12 season not gotten significantly shortened. He played only 272 snaps in 2020.

Here is where the Denver Broncos rank in terms of average, best and worst:

Below you will find a Week 4 roundup for the Broncos in our consensus 2021 NFL Power Rankings.

Teddy Bridgewater has been what a team with a potentially elite defense needed -- a calming, prepared and opportunistic passer who can close out drives and avoid turnovers. Yes, the Broncos' first three opponents are now 0-9, but the Broncos won those games by 14, 10 and 26 points. Bridgewater leads the league in completion percentage, is seventh in average length of completion and is fifth in passer rating. He already has become a leading voice in the locker room. And most importantly for a team that led the NFL in both giveaways overall as well as interceptions last season, he has not turned the ball over. -- Jeff Legwold

Sure, the Broncos' undefeated start has come at the expense of also-ran squads that are a combined 0-9 through three weeks, but let's give credit where credit is due: Vic Fangio has this team playing well on both sides of the football. The soft schedule is undeniable, but so too is the quality tape Denver has put out for three weeks. Fangio's balanced defense continued to feast on the top of the 2021 NFL Draft, shutting down No. 2 pick Zach Wilson one week after beating up on No. 1 pick Trevor Lawrence. The D's dominance has put Teddy Bridgewater and the offense in good position for three weeks. A Week 4 matchup against the Ravens should present a greater challenge all around.

Below you will find the weekly NFL regular-season schedule for the Broncos in 2021.

The table below are all of the 2021 NFL Draft picks selected by the Denver Broncos.

The chart below displays the Fantasy Football Average Draft Position (ADP) movement over the past 30 days for Denver Broncos running back Melvin Gordon in 12-team standard-scoring formats. 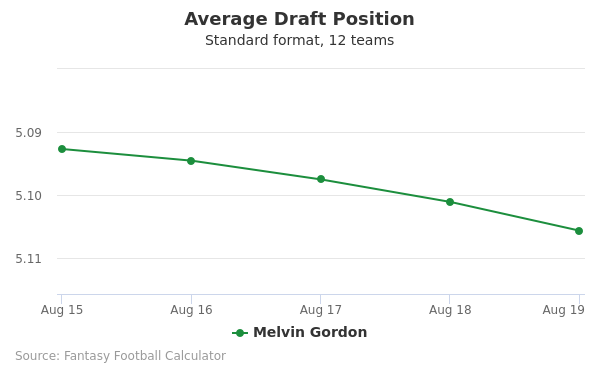