The following are picks in recent mock drafts for the Jaguars:

Cam Robinson is scheduled to hit free agency. Even if he returns, Evan Neal and Robinson each has the flexibility to play guard.

More than half way through the season, the Jaguars are the second lowest scoring team in the NFL at 15.9 points a game. A large reason Jacksonville struggles to score revolves around the team's inability to convert on third downs. The Jaguars are last in the league converting third downs at 31.7 percent ten games into the season. Taking Neal could possibly provide power and balance for short yardage conversions, while fortifying Jacksonville's pocket protection during obvious passing situations.

Here is where the Jacksonville Jaguars rank in terms of average, best and worst:

Below you will find a Week 18 roundup for the Jaguars in our consensus 2021 NFL Power Rankings.

Shad Khan has rarely done that in his 10 years as owner. Even the decision he did get right -- bringing back Tom Coughlin as football czar and hiring Doug Marrone -- backfired spectacularly after one good season. This was a lost year for Trevor Lawrence, and the franchise is at real risk of potentially ruining his career if Khan flubs another head-coach hiring. Based on his past record, there's little confidence that Khan will make the right choice, unfortunately. -- Mike DiRocco

Trevor Lawrence's rookie season has gone terribly, and there were moments during the Jaguars' latest lopsided loss -- this time a 50-10 shellacking at the hands of the Patriots -- where we couldn't help but wonder what lasting effects this year might have on the No. 1 overall pick. Lawrence threw three more interceptions on Sunday; his only highlight came on a garbage-time screen pass TD that ended a streak of 184 pass attempts without a score. Given Lawrence's generational talents and the melodrama that conspired to melt his debut campaign, it's fair to say no team has a more important offseason in front of it than Jacksonville.

Below you will find the weekly NFL regular-season schedule for the Jaguars in 2021.

The table below are all of the 2021 NFL Draft picks selected by the Jacksonville Jaguars.

The chart below displays the Fantasy Football Average Draft Position (ADP) movement over the past 30 days for Jacksonville Jaguars running back Leonard Fournette in 12-team standard-scoring formats. 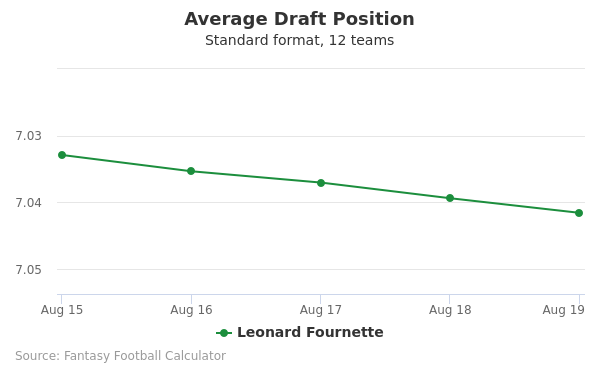