The following are picks in recent mock drafts for the Steelers:

Ben Roethlisberger will turn 40 next offseason and if this year isn't his final year, it's obvious that there isn't much left in the tank. A former five-star recruit and USC transfer, Daniels threw for 1,231 yards, 10 touchdowns to only two interceptions in his four games for the Bulldogs in 2020.

The Pittsburgh Steelers have a few different options behind quarterback Ben Roethlisberger at the moment, including Joshua Dobbs, Mason Rudolph and former first-round selection Dwayne Haskins, who was let go by Washington last season. Still, given how Roethlisberger's season ended in 2020, you might think that finding the true quarterback of the future will be atop the list of to-dos for the Steelers in 2022.

Could Desmond Ridder be the answer? Before announcing his decision to return to Cincinnati for his senior season, Ridder was getting some buzz as perhaps a quarterback to crash the top tier in the 2021 NFL draft. He has been a mainstay in the Bearcats' offense the past few seasons and posted career-high marks in completion percentage (66.2%) and NCAA Passing Efficiency (152.9) last season.

Slovis had an up and down sophomore year after an outstanding true freshman campaign. He doesn't quite have the arm of some others in this class, but he's been one of the most accurate quarterbacks in the class for two years running.

Below you will find the weekly NFL regular-season schedule for the Steelers in 2021.

Here is where the Pittsburgh Steelers rank in terms of average, best and worst:

Below you will find a Week 5 roundup for the Steelers in our consensus 2021 NFL Power Rankings.

Why it's a surprise: The Steelers got plenty of pressure out of the four-man rush in Week 1, but haven't been able to replicate the same results the past two weeks. Without T.J. Watt and Alex Highsmith, the Steelers didn't record a single sack against the Bengals, and against the Packers, they only had two -- including one that appeared to just be a trip by Watt. Watt, who sustained a groin injury against the Raiders, said he felt healthy enough to play against the Packers, but he -- and the rest of the Steelers' front -- haven't performed to the same level they did in Week 1. The Steelers have shown an ability to play championship-level defense, but the lack of replication is surprising. -- Brooke Pryor

Beating the Packers at Lambeau Field requires a precision performance by the offense. The Steelers couldn't deliver that on Sunday, and they'll take a three-game losing streak into Week 5 as a result. The running game remains non-existent in Matt Canada's offense, and Ben Roethlisberger and his receivers aren't doing enough. On Sunday, Roethlisberger and JuJu Smith-Schuster left points on the field with failures to connect on two pass plays that should have gone for scores. Roethlisberger could have been more accurate on the throws, while Smith-Schuster could have helped his QB by flashing the playmaking ability that marked his first two seasons in Pittsburgh. The attack is not as dynamic as it needs to be, and it's made the Steelers a middling team.

The table below are all of the 2021 NFL Draft picks selected by the Pittsburgh Steelers.

The chart below displays the Fantasy Football Average Draft Position (ADP) movement over the past 30 days for Pittsburgh Steelers running back James Conner in 12-team standard-scoring formats. 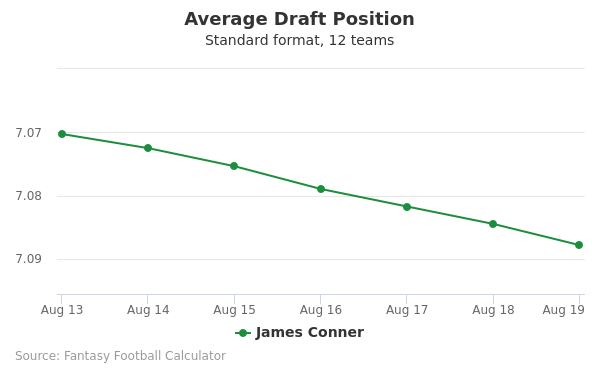