If it weren't for the season-ending injury to Cincinnati Bengals quarterback Joe Burrow in Week 11, it would have been an even better 2020 season for fellow rookie Tee Higgins.

Leading the team in both receiving yards and touchdowns, Higgins finished his rookie campaign with 67 catches for 908 yards and six touchdowns on 108 targets. Meanwhile, Higgins (14) had twice as many 20-yard receptions as any other receiver (Tyler Boyd, seven) on the roster.

The rookie barely played in Week 1 (15 snaps, zero targets) and Burrow was injured in Week 11, as noted above. Before Burrow's injury, however, Higgins was really hitting his stride from Weeks 3 to 10.

During that seven-game span, Higgins averaged 14.3 fantasy points per contest and only 10 receivers scored more fantasy points than the rookie. He had at least 62 yards in six consecutive games from Weeks 4 to 10 with an average of 88.0 per game over that stretch.

The trio of Tyler Boyd, A.J. Green and Higgins all exceeded the 100-target mark, but all three of them finished within the narrow range of 104-110 targets. Assuming that free agent-to-be A.J. Green doesn't return, his 104 vacated targets will open up more opportunities for the team's other receivers including Higgins.

With the fifth pick in the 2021 NFL Draft, many draft analysts have mocked Oregon offensive tackle Penei Sewell to the Bengals. While I have the Miami Dolphins selecting former LSU wide receiver Ja'Marr Chase at No. 3 overall in my 2021 NFL Mock Draft, it's certainly possible that Chase, if available at No. 5, gets reunited with his former LSU quarterback.

Especially if the Bengals add a lesser talent than Chase via the draft as competition, Higgins could see a significant bump in targets that makes him a worthy of a pick as a mid-tier WR2 in 2021.

Back at Clemson, Higgins tied DeAndre Hopkins and Sammy Watkins for the school record for most career receiving touchdowns. Given his size, catch radius and strong hands, Higgins should be utilized more in the red zone and could approach 8-10 touchdowns in his second season.

The Bengals ranked fifth in pass-play percentage (63.3%) in 2020. In a division with three playoff-caliber teams that all won at least 11 games, the Bengals will likely be an underdog in the majority of their games even if they improve year-over-year with a healthy Burrow.

Based on scoring format, here are the current Fantasy Football ADPs for Tee Higgins:

Below is a chart of Tee Higgins' half-PPR ADP over the past month: 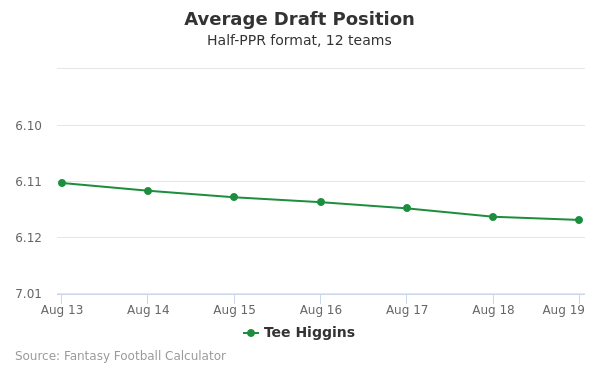 Compared to our way-too-early half-PPR rankings (WR23), Higgins offers some value compared to his current ADP (WR27). Unfortunately, that discount may be short-lived as his ADP has been gradually rising. Especially provided that Burrow is ready to go for the start of the season and that the Bengals draft Sewell over Chase, Higgins has the potential for a significant year-over-year improvement in production. Even if the Bengals add a stud receiver like Chase, Higgins is a viable WR3 for fantasy managers in 2021.