The Giants ranked middle of the pack in total offense (17th) and scoring offense (16th), but Barkley was an absolute stud despite the mediocre offense. Leading the NFL in scrimmage yards, Barkley rushed for 1,307 yards and 11 touchdowns and added 91 catches for 721 yards and four more touchdowns.

Missing almost all of last season, Freeman is poised for a bounce-back with good health (of course). Not only is Tevin Coleman now in San Francisco, but the Falcons used a pair of first-rounders on their offensive line. I have Freeman projected for a conservative 273 touches and 1,358 yards from scrimmage and perhaps a less-modest 10 touchdowns. Then again, Freeman had a total of 35 touchdowns in the previous three seasons and my projections assume a lower touchdown rate on his rush attempts than his career average (3.91%).

Productive when given the opportunity, Godwin is poised to take another big step forward with DeSean Jackson now back in Philadelphia. Over the past two seasons, D-Jax has missed six games and Godwin has 98-plus yards in four of those games. Coach Bruce Arians has described the 23-year-old wideout as someone who could be "close to a 100-catch guy."

Coming off a career-best season, White shattered his previous marks with 181 touches including 87 receptions, 1,176 scrimmage yards and 12 touchdowns during the regular season. White may see fewer carries, but there's the potential that he's even more involved as a receiver with the retirement of Rob Gronkowski. He may be this team's flex option, but he performed as an RB1 (top 12) last season and should at least be an RB2 (top 24) in PPR formats in 2019.

Before missing the 2018 regular season with an ACL injury, Henry ranked eighth in PPR points per game among tight ends in 2017. Returning for limited action in the playoffs, Henry is a top-five option for me in 2019.

There are several running backs that could be productive in San Francisco, but Coleman is the favorite to lead the group in workload and production.

In better shape than last year, Penny was on the short end of the workload split with Chris Carson in 2018. That gap should narrow in 2019 and there is some breakout appeal for the former first-round pick.

Once again, Ekeler averaged more than five yards per carry and 10 yards per reception. But as he nearly doubled his workload (74 to 145 touches), MG3's complementary back finished as the RB25 in PPR last season. Given Gordon's injury history and new threat of a holdout, there is a better chance than not that Ekeler will get an opportunity to make a start or two, but he has stand-alone value either way.

Terrible may be too kind of a word to describe Jones' rookie season -- 77 yards from scrimmage, 1.9 YPC and 4.7 Y/R. Without adding any serious competition to the backfield, last year's 38th-overall pick is in position to put his 2018 season behind him. He gets a fresh start with a new coaching staff and the new staff has been excited about his progress this offseason.

This has turned out to be a TB-heavy squad, but I feel all of my Buccaneers selections have been good values where they were picked. Starting only nine games last season, Winston set career highs in completion percentage (64.6), yards per attempt (7.9) and TD% (5.0), but he also set a career high in INT% (3.7). Winston needs to cut down on turnovers, but Tampa's passing offense should rank near the top of the league once again.

The next time that Prescott finishes outside the top-12 fantasy quarterbacks will be his first. And based on my rankings, that won't be this year. Through his first three NFL seasons, Prescott has finished as fantasy's QB6, QB11 and QB10, respectively. At a relatively low cost, I like doubling down and pairing Prescott with another QB in this range.

Not only did he miss roughly half the season, but Crowder set a career low in receptions per game (3.2) and his 43.1 YPG was his lowest since his rookie season. A return to his 2016/2017 numbers -- 60-plus catches and 750-plus yards -- seems reasonable, however, if he (and Sam Darnold) can stay healthy. 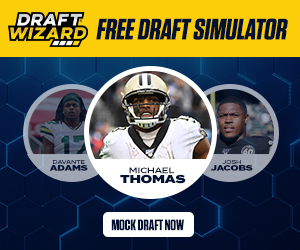