The table below lists Akers' rushing and receiving stats by year and for his career.

The table below include awards and honors that Cam Akers has received.

Despite a modest start, Los Angeles Rams rookie running back Cam Akers emerged as a workhorse down the stretch in 2020.

Making his NFL debut against the Dallas Cowboys with 15 touches, Akers exited early -- after three touches -- with a rib injury sustained against the Philadelphia Eagles in Week 2. That rib injury kept him out of Week 3 and 4 as well. From Weeks 5 to 12, he never exceeded 10 touches.

In that Week 12 matchup against the San Francisco 49ers, however, Akers was clearly the team's most productive back as he carried the ball nine times for 84 yards and a touchdown. After that point, he became the clear lead back.

"Probably about midseason, that's when I started to get a good grasp on the run concepts, what the coaches wanted," Akers said after the season (per ESPN). "I just kind of settled in, played football and it showed."

Even though he missed Week 16, only four running backs had more touches than Akers (94) from Weeks 13 to 17.

The image below shows the change in Fantasy Football Average Draft Position (ADP) of Cam Akers over the past 30 days. 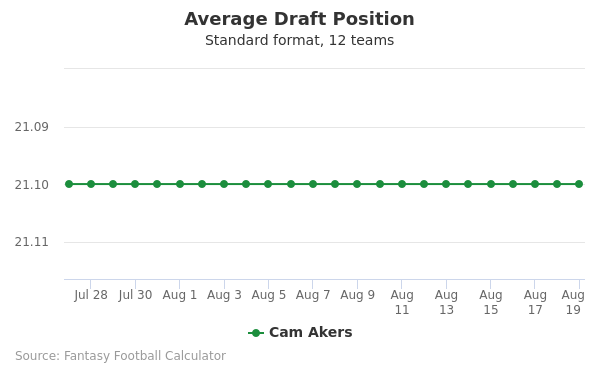